Worship at Battersea United Church takes place on Sundays at 9:15 am
​(time may vary for special services so check the announcements page to stay up-to-date). 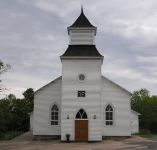 Two strands of Methodism are entwined in the present Battersea United Church - Wesleyan Methodism and Episcopal Methodism. The Wesleyan Methodists were established in the early 1850's, probably around 1853. It was part of the Waterloo Mission by 1856, and in 1858 the present church was built. By 1884 all branches of Methodists in Canada were united in the Methodist Church of Canada. "When Battersea Church was started in 1858, Henry VanLuven offered to give double any subscription given to the building fund. Up until then, the subscriptions had not been very plentiful, but Mr. VanLuven's offer was taken up and he ended up having to contribute very liberally. He donated the land on which the church was built." (Notes from Karl Van Luven).     There were early struggles between the Wesleyans and the Episcopal Methodists, but things improved by 1874, and in early 1882 the interior of the church was improved, a house and lot bought for parsonage, and the house renovated. In 1883 the arguments over Methodist union split the church, but union took place and the trouble soon disappeared. After union the church continued as a mission until 1891 and was considered a "rugged field." The church became self-sustaining in the year and from then on it is listed as a circuit.

A bell tower was built shortly after World War I. The inscription on the bell reads: "Meneely & Co. Watervillett, N.Y. 1921 'Holiness unto the Lord'. In memory Henry VanLuven Born in Duchess County, N.Y. Dec. 15, 1794 Died at Battersea, Ontario Oct. 27 1891. A veteran of Lundy's Land and a soldier of the Cross."

In 1925 the Battersea Methodist Church became part of the United Church of Canada. In a letter from the minister in 1958, the Rev. Robin Sharp says, "Over the years the Battersea United Church has weathered many storms, reached many a low ebb, yet achieved many 'mountain top experiences' as it has many a steady witness to the power and love of Jesus Christ in people's lives."

Dr. N.V. Freeman, a medical doctor for many years in the community and Sunday School Superintendent for 44 years chaired a committee charged with making major improvements in 1958 as part of the centennial celebrations. These included redecoration and renovation of the church, installing a new modem heating system and building an addition on the back of the church to accommodate a growing Sunday School.

In 1968, the Battersea United Church was realigned with the Inverary United Church to become the Storrington Pastoral Charge. This alignment continues to this day. Thanks to the hard work of the Committee of Stewards, the building is still in excellent condition and improvements to the heating system and electrical wiring have recently been done. A new carpet was laid in the sanctuary and new oak doors were gifted to the church in 1999 by Larry and Grace York. Renovations to the hall were done in 2003 including the building of a fine storage room which has improved the facility a great deal.